Kampala, Uganda | DAILYNEWS UG | President Yoweri Museveni has said he will engage the Speaker of Parliament to fast-track the amendment of the Umeme Act, and ensure that electricity goes directly from generation to the industrial consumer to spur economic growth through industrialization.

“Power should go directly from generation to the consumer, especially the industrial consumer. We should amend the law. I will talk to the speaker,” Museveni said during a meeting at State House Entebbe with Chinese investors from the Mbale Industrial Park who protested their omission from the direct power consumption despite having a bigger industrial park than MMP Industrial Park in Buikwe district. 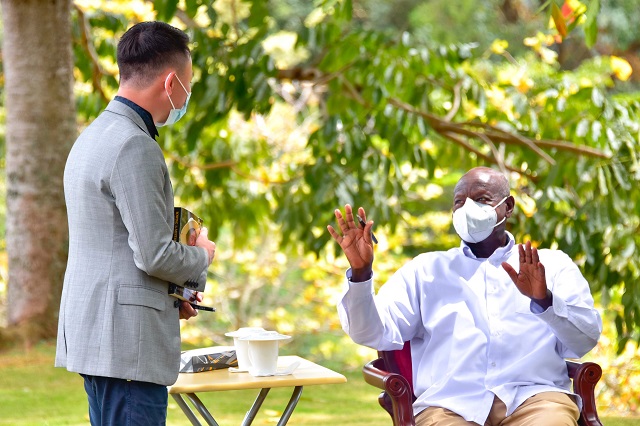 During the meeting, a power investor Ming Qian Sun of Zhurong Hydropower Consumption Park also presented a proposal for a Power Purchase Agreement guaranteeing 300MW of power supply at a tariff of USD3.5cents and 15 acres of land close to Karuma Hydro powerplant. Zhurong hydropower is interested in bulk power purchase, potentially being the largest power off-taker in Uganda.

“Once we reach full capacity, power bills paid by us alone will equate to 2 percent of the government spending. We connect directly to Karuma substation at 142kV, no other off-taker in Uganda at a voltage higher than 33kV. We will build our own substation which will be transferred to the ownership of UETCL, thus significantly reducing the upfront investment needed from the public sector to facilitate the project,” Ming Qian Sun Said.

He added that they are also interested in investing in a crypto-currency industrial park with an initial USD 15 million in the first year and subsequently growing it to USD 20 million in the second year.

The meeting was attended by the Minister of State for Finance in charge of Privatization Evelyne Anite, the State for Mineral Development Peter Lokeris and the Minister of State for Energy Sidronius Okaasai Opolot, alongside Zhang Zhichum, the Chief Executive Officer of Tang Group, Wang Wentong, General Manager Tian Tang Group, Li Wenchao, Deputy General Manager Mbale Industrial Park among others.

Top US General: Potential for ‘Significant International Conflict’ on