The red devils yesterday suffered a huge humiliation against neighbors Manchester City who are now 6 points clear in the league.

Goals from Kevin De Bruyne (2) and Riyadh Mahrez (2) sealed the evening fixture with a consolation from the visitors scored by Jadon Sancho..

Manchester United now sit in the 5th position, with one point behind arc rivals, Arsenal Fc who have two games-in-hand.

This may well go down as one of the most shameful derby defeats in Manchester United’s long history. They are the Damned United on this spineless evidence. By the end it was a capitulation, a collapse, a collective embarrassment with Manchester City utterly humiliating them. 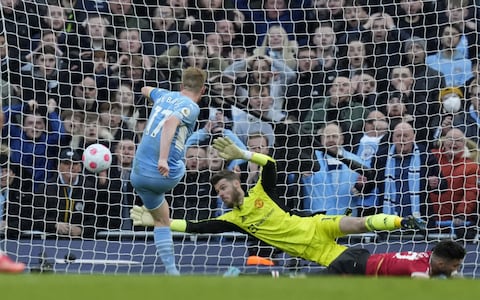 Above: KDB scores his, and City’s, second

It really did look like United had given up or maybe, more charitably, they were just run ragged and although their former captain, turned pundit, Roy Keane is never slow to use harsh language his verdict of “unforgivable” had resonance. This deserves a reckoning and yet another realisation of how far they have fallen behind.

There have been so many mistakes made at United over the past decade but going into this crucial encounter with a formation that allowed free rein to Kevin de Bruyne added to that woeful list.

The City captain scored twice, with Riyad Mahrez scoring two more, to re-establish their lead at the top of the table back to six points and with that severely damage United’s more modest hopes of simply finishing in the top four and qualifying for the Champions League. 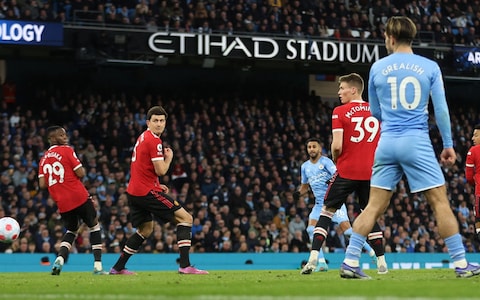 United now find themselves down to fifth, not just a point behind Arsenal but having also played three games more and if this was a good day for De Bruyne it was a wretched one for the man wearing the United armband. Harry Maguire’s season has fallen apart, he looks forlorn, bereft of belief and he was ‘nutmegged’ for two goals with a third deflecting off him.