This Pipeline will go through people’s lands and properties and the long-awaited moment for the compensation of people affected by the East African Crude Oil Pipeline has come after the EACOP Company gave a timeline to start and complete the exercise.

Tiffen was responding to queries raised by the PAPs through the Civic Response on Environment and Development-CRED in a letter dated February 11, 2022. Appeals for compensation have been at the center of every discussion in the pipeline project for close to three years since the valuation process was completed by New Plan Ltd.

There has also been a series of protests among the PAPs and local leaders in the districts of Rakai, Kyotera, Lwengo, Sembabule, and Gomba.

Bashir Twesigye, the Legal Advisor-CRED, says they held a meeting with officials from Total Uganda, Total France, and EACOP over the various grievances mainly compensation.

He further adds that they maintained the decision of adding a 15 percent increment for the properties and that of the delays which total to 30 percent. 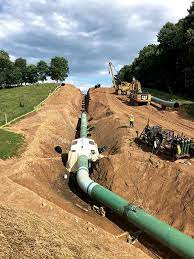 The PAPs that have already opened up accounts in centenary bank are excited by the compensation plan. However, some of those with land cases in court are worried that the compensation process may fail to consider them if the court proceedings take long.

Joyce Nabulime, one of the PAPs in Rakai district says that there is a court case on her land that has been going on for 8 years. She says that the case may not be resolved by the compensation time.

Still, Sulaina Nambali, a pipeline monitor from Lwanda sub-county says that the compensation period may delay due to lack of letters of administration for the families of the deceased PAPs.

However, Twesigye explains that any land matter in court concerning the PAPs equally concerns the government and Total or EACOP Company since they cannot use the land before compensating the PAPs.

He adds that since the PAP is in the right of way of the pipeline, the government and Total have to intervene to expedite court processes to allow the project to continue.