Beijing, China | DAILYNEWS UG |  Key parts of a modern drilling rig customized by CNOOC International for Uganda’s Kingfisher oilfield, has left the port of Yantai in China for East Africa.

The most advanced Chinese oil drilling equipment in the world was shipped to Uganda after a brief ceremony last week attended by CNOOC Uganda Ltd President, Chen Zhuobiao.

Dubbed LR8001, is a deluxe land rig that uses new technology, reducing noise and discharge. Its arrival will be another step in Uganda goal to have first oil by 2025.

The oil and gas project in the Lake Abert region, will also include the construction of a 1,443-kilometer oil pipeline, the first of its kind to connect Uganda and Tanzania in East Africa, which will ensure the export of crude oil.

Agreements to mark what is technically called the Final Investment Decision (FID) were signed at an elaborate ceremony on Feb.01 this year.

The Lake Albert Development Project involves building central processing facilities at two main oil fields. One is named Tilenga and the other is called Kingfisher. The third flagship project is the East African Crude Oil Pipeline (EACOP) in Uganda and Tanzania.

The development of the Tilenga and Kingfisher oil fields will cost the oil firms about US$ 7bn (Tilenga valued at US$4bn and Kingfisher US$3bn) while the East African Crude Oil Pipeline (EACOP) which runs from Hoima in mid-western Uganda to the port of Tanga on the Indian Ocean coast of Tanzania is estimated to cost about US$ 3.55bn.

The oil pipeline includes six pumping stations, powered by solar plants in Tanzania and a heat tracing system. The physical characteristics of the oil from Tilenga mean that it needs to be kept at a temperature of 50oC for transportation.

When construction is completed, the Tilenga and Kingfisher upstream projects are expected to produce about 190,000 and 40,000 barrels per day (bpd) in 2025, respectively while the 1443km East African Crude Oil Pipeline is expected to transport close to 216,000 bpd to the international market. 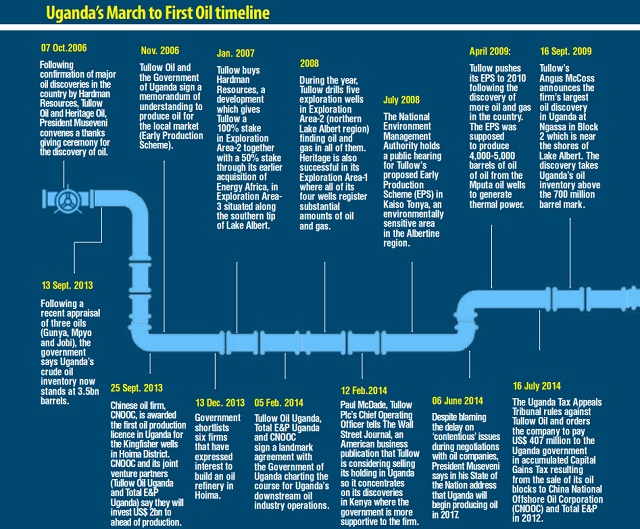 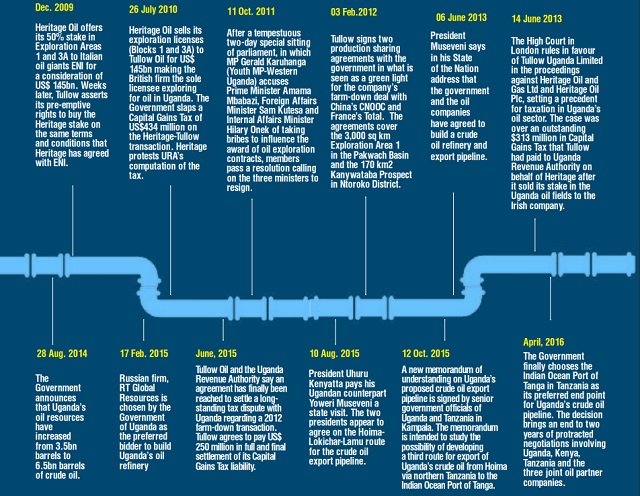 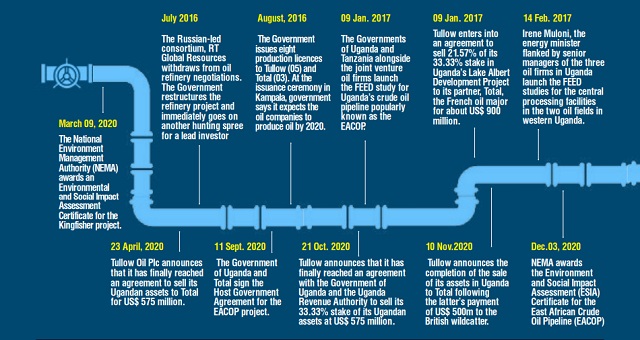 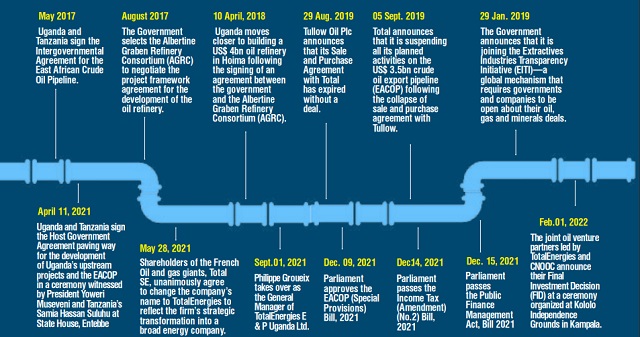