MEXICO CITY (DAILYNEWS UG) If you happen to be flying between Mexico City and Washington, DC, this week, you could be seatmates with a president.Mexican President Andrés Manuel López Obrador will fly commercial to the United States on Tuesday for meetings with US President Donald Trump.

That means the president of the tenth-most populous country in the world will hope his flight isn’t delayed, wedge any carry-on into the overhead and pray for a consistent cabin temperature, all while dreaming of more leg room. You know, like the rest of us. 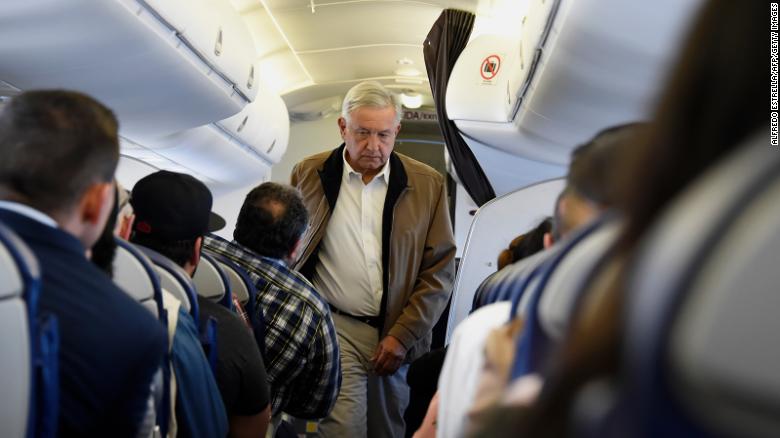 Mexican President Andres Manuel Lopez Obrador boards a commercial flight bound for Culiacan at Mexico City’s international airport, on Feb. 15, 2019.The President, who says private presidential planes are the trappings of the “neoliberal elite,” will even have to make a stopover.

There are no direct flights from Mexico City to Washington,” said López Obrador last week during his daily press conference. “But we can make a connection and arrive in Washington one day before the meeting we have.”A spokesperson for the Ministry of Foreign Affairs would not confirm the president’s exact itinerary, citing security concerns. But we have many more questions than just what flight he’s on.

So, logistically, how does this work?

We have some insight into how the President flies commercially because this is not the first time he has done so. He’s done so multiple times on domestic flights in Mexico.Videos and news reports show him starting his journeys in Mexico City’s aging airport, mobbed by selfie-seeking travelers shocked to see a president walking by.

He then heads through security and makes his way toward his gate. CNN can’t confirm if he is ever tempted to purchase unnecessary magnets at tourist shops or buy an overpriced coffee.When he has boarded his plane in the past, he sits in coach, chatting with other passengers the entire time.

The spectacle has become a signature of sorts for the longtime politician.This week’s flight will be slightly different, though — the trip will be López Obrador’s first international visit since taking office in December 2018. It’s unclear how exactly that might change what has, at least domestically, become pretty standard operating procedure.

In the US, he will have to go through customs and immigration, though his diplomatic passport should at least gain him access to a faster line. It will make for an unusual day at the office for whichever US Customs and Border Protection officer is tasked with stamping that passport.

If you subscribe to the notion that presidents are targets, then the answer is no — traveling through multiple public airports and being trapped on planes with strangers increases López Obrador’s exposure to potential threats. But he might disagree.

The President has eschewed armed guards since taking office, disbanding the previous presidential security detail. He instead travels around with a handful of aides and escorts who routinely allow the public direct access to the President.His office doesn’t publicize the exact details of his trips and he often shows up to the airport unannounced.But for this trip to the White House, the President has already said publicly he will fly on Tuesday.

A simple search online shows there are not that many flights to choose from, especially during a demand-sapping pandemic. Mexican officials could of course book a series of one-way flights, making the ability to map potential flights more difficult.But anyone who wants to see the President in person could make a pretty reasonable guess about which flight he might be on leaving from Mexico City.

There also exists the risk of collateral damage any attack on the president could pose to the public traveling with him: Earlier this year, a passenger who discovered López Obrador was on his flight to the Mexican city of Villahermosa asked to be let off the plane. In a video shared widely online, the man could be heard saying it was not safe for his family to be onboard.There’s also the fact that the President is choosing to fly in the middle of a pandemic.

The infection risk of flying can be mitigated when best health practices are practiced, like wearing a mask. But López Obrador has never worn a mask in public and it’s unclear if he’ll do so on this trip.Mask or not, flying commercial is certainly riskier than staying at home or flying private. And López Obrador does have his own plane. He’s just choosing not to use it.

Wait, he’s got his own plane!? Why doesn’t he just use that?

Officially, the Mexican government purchased a 787-8 Boeing Dreamliner for presidential use back in 2012. The plane’s price tag was a whopping $218.7 million.López Obrador, a leftist known for his populist positions and strong base among lower income communities, had long decried the plane as a notorious example of government excess and vowed to never use it.

The plane has been up for sale for more than a year (asking price: $130 million), but López Obrador has struggled to find a buyer. The government keeps it at an airfield in Los Angeles, California, and still pays for its maintenance and storage.

López Obrador said earlier this year he would sell tickets and raffle off the plane to the winner. But what, exactly, would the lucky raffle winner do with a wide-body jet engine passenger aircraft? He later changed his proposition, saying he would still sell tickets to cover the cost of the plane but, instead of gifting the plane itself to the winner, would instead give a 20 million Mexican pesos cash prize to 100 winners, the equivalent of roughly $900,000.

Meanwhile, attempts to sell or lease the plane will continue.Critics say López Obrador’s unwillingness to use that plane, or another plane from Mexico’s Air Force, is a cheap political stunt designed to appeal to the many Mexican voters who will never be able to afford a plane ticket.

Supporters have backed his stance, saying boarding a plane with wide leather seats, a double bed, and a spacious bathroom with a shower would be unconscionable with so many Mexicans struggling with poverty.No matter which side you fall on, flying commercial is definitely the cheapest option.

A Kayak.com search over the weekend for a one-stop, roundtrip Mexico City — Washington, DC, ticket, leaving Tuesday and returning Thursday, was a little more than $1,100 USD per person.