Ndayishimiye, 52, a former army general and Hutu rebel like his predecessor, had been handpicked by the powerful ruling CNDD-FDD to run in a May 20 presidential election. 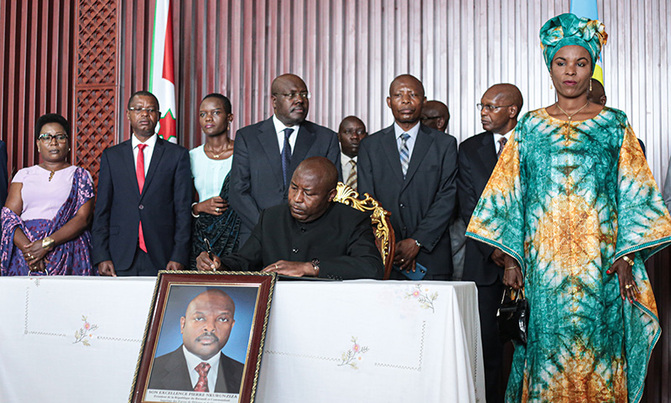 Evariste Ndayishimiye (C), Burundi’s elected President from the ruling party, CNDD-FDD, signs the book of condolences with his wife Angelique Ndayubaha (R) at the state house in Bujumbura on June 13, 2020. (Photo by Tchandrou NITANGA / AFP)

Burundi’s newly-elected president Evariste Ndayishimiye will be sworn in on Thursday, the foreign ministry announced, in a ceremony fast-tracked by the sudden death of the incumbent, Pierre Nkurunziza.

Nkurunziza died on June 8 aged 55, of what authorities said was heart failure.

His death came less than two weeks after his wife had been flown to a Nairobi hospital for treatment for coronavirus, according to a medical document seen by AFP.

The foreign ministry invited diplomats and foreign organisations to “take part in the inauguration ceremony” in the capital Gitega, in a letter sent out on Monday.

Ndayishimiye, 52, a former army general and Hutu rebel like his predecessor, had been handpicked by the powerful ruling CNDD-FDD to run in a May 20 presidential election.

He won the vote with 68.7 percent, and an opposition bid to have the results overturned due to alleged fraud was overturned just days before Nkurunziza’s death.

Normally, following the death of a president, the speaker of Burundi’s parliament would step in as head of state.

But as the country already had a president-elect, the constitutional court ruled last week he should be sworn in immediately, instead of August as planned.

Nkurunziza, a devout evangelical who believed he was chosen by God to lead Burundi, leaves behind a deeply isolated country in political and economic turmoil after his divisive 15-year rule.

His 2015 run for a third term in office sparked protests and a failed coup, with violence leaving at least 1,200 dead while some 400,000 fled the country.

Nkurunziza’s decision not to run in the May 20 election stunned many, as it came after the constitution was changed to allow him to do so.

The government has yet to announce a date for Nkurunziza’s funeral.

Suspicions are high that the president had contracted the new coronavirus, after months of assuring Burundi it was being protected by God from the pandemic, and taking few measures to combat it.

Officially the country has recorded only 104 cases and one death.

Nkurunziza’s wife Denise Bucumi was hospitalised at the end of May with the virus. A medical document seen by AFP said she had tested positive for the virus and suffered “respiratory distress”.

A medical source at the Karusi hospital where Nkurunziza died, told AFP he had also been in “respiratory distress” before his death.

A medical source at the Kamenge university hospital in Bujumbura told AFP that the head of the institute of public health “came to requisition our hospital’s only ventilator” last Monday.

Both were flown to the hospital in Karusi, but it was “too late, president Nkurunziza was already dead,” a medical source in Karusi said.