Rwandan authorities on Monday 8th June 2020 handed over the body of a Ugandan businessman who was shot on Monday last week while smuggling goods into Rwanda. The event took place at Katuna border point.

While handing over the deceased’s body, Viwanyiringira condemned acts of illegal entry into Rwanda by Ugandans. 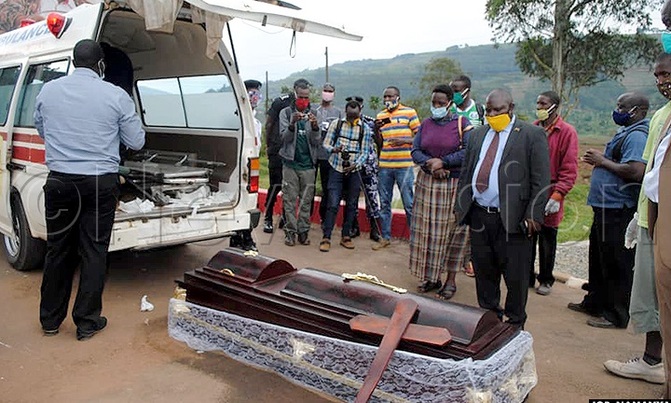 The Rwandan delegation was led by Jean Marie Chantel Viwanyiringira, the Mayor for Burere district. While the Ugandan team was led by Darius Nandinda, the Kabale Resident District Commissioner, Patrick Besigye Keihwa, the Kabale district chairperson and other political and security leaders.

While handing over the deceased’s body, Viwanyiringira condemned acts of illegal entry into Rwanda by Ugandans.

Keihwa called for togetherness between the two countries in dealing with cases.

Geoffrey Byomuhangi an uncle to the deceased expressed deep sadness on the way his nephew was handled.

The deceased identified as Sydney Muhereza aged 35, a resident of Kagogo village in Bigaaga parish, Butanda Sub County was reportedly shot dead by Rwandan security officers on Monday last week at around 7:00PM.

Muhereza was gunned down in Sebeya village, Rwerere Parish, Burera district in Rwanda, about five kilometers from the Uganda-Rwanda borderline.

It is alleged that the deceased was gunned down trying to smuggle six cartons of matchbox into Rwanda.